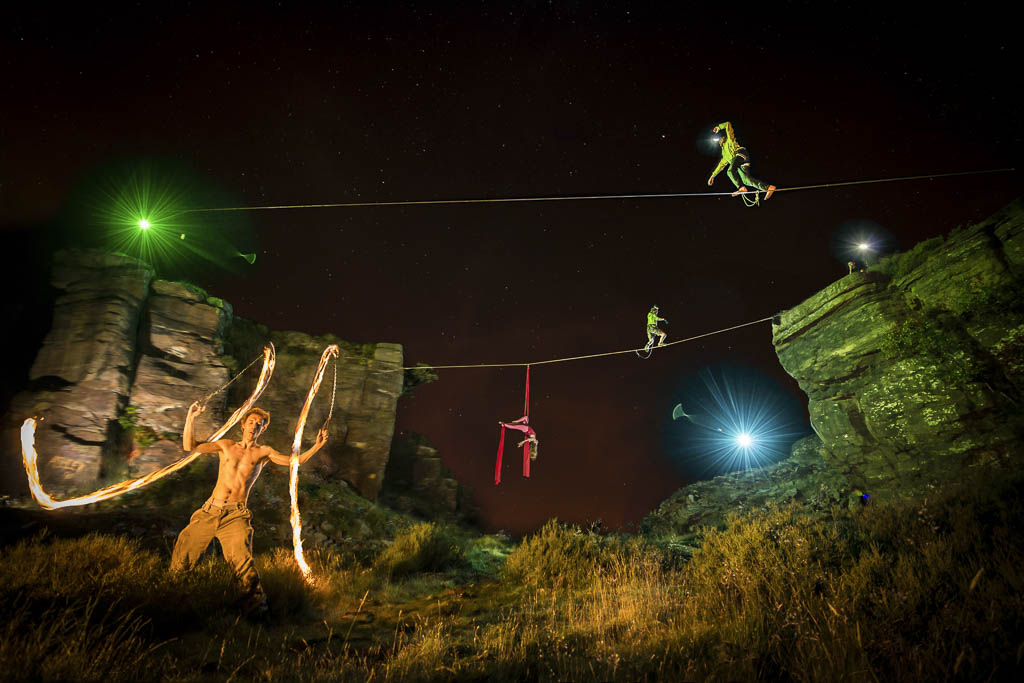 It is Saturday, 21st June 2014… My home adventure photography studio floor is completely covered with boxes and crates of film, photography, lighting and highlining equipment. I am about to be picked up by “The Aerial Addicts”, a group of aerial performers specialising in highlining based in Cardiff, Wales and of which I have come to be a frequent part of too. In a few hours I will be shooting a photoshoot that has been in my mind for quite some time! Mixing adventure sports, circus arts an studio lighting to create something visually unique.

The plan, is simple…To create an outdoor night studio in pure darkness and to create some adventure sports conceptual image. Shooting the art of highlining mixed with other visually engaging circus performances like silks aerials and fire poy for the first time. All of this lit by some dramatic and colourful studio lighting inspired by a circus feeling. Oh! and I am forgetting, all in camera  with no photoshop composites.

At the same time I am very keen to push and test the low light capabilities of my recent acquired baby the Nikon D800. The idea crossed my mind about one year ago while watching Kamil Tamiola’s project Cascades of Light.  Since then we have also started scouting locations in preparation for this day. The only problem is that despite all of the shout-outs in the city of Cardiff, we are about to go shooting and I am yet to find an aerial silks performer interested in joining such a crazy project in the middle of the cold mountains of Brecon Beacons and with a bunch of strangers. Who said that adventure photography was easy?

Suddenly my phone facebook notifications pop on the screen. A notification from the highliners Josh Davern and James Merryweather confirming a pick up very shortly. Great! Note that very shortly can be quite a while when we live by Mr. Davern’s time! But well… No one is perfect!

A second notification! This time comes from Facebook regarding a post asking for aerials performers interested in this photoshoot that I posted a week ago. Can you believe it?  Someone is bitting the hook. A girl of name Bethan seems overly enthusiastic to be part of this shoot. Amazing!! She tells me that she was pointed  in my direction by a common gymnast friend that apparently told her “You really want to be part of this shoot Beth!”.  Go figure why! Strangers, cold, wind, darkness!

Her brief message also says that she is very keen but that she doesn’t have a silk! Well! Not the time of accessory I normally have in my wardrobe or camera bag! I reply to her that maybe it a bit too late for this project as we are literally leaving for the location where we will spend the next few days, but that I am sure we will fin another opportunity to collaborate. I can’t hold myself from telling her that she oughta know someone that has a silk. No?  The conversation ends. But my mind is spinning at the speed of light! I can’t stop thinking that considering the amount of effort we are about to put on all of the rigging and lighting on location, maybe I need to try something. After all I am on  Mr. Davern’s borrowed time and the chances of being picked up in the next hour are fairly slim.

I call the girl to tell her that if she is really keen and has a way to get herself to the location, maybe we can still both push on our ends and try to find a silk in this town. There has got to be one somewhere! I call my dear friend Nat, that is going to be the fire poy talent and man of many resources. A quick explanation and Nat is on the case to find a silk Cardiff! Half an hour goes by until the phone rings again. Nat has found some silk fabric but the cost is way too expensive and hasn’t even been tested for the aerial application we intend to give it. We decide to drop it.

Moments later the door bell rang. Josh and James were ready to pick me up and all of the equipment. As we were leaving the city I quickly update them on the latest news and the potential for the so much sought after aerial performer. The phone rings again! This time with good news. The phone rings once more and Beth seems very happy on the phone. She has found a silk to borrow and has a way to get there later in the day with her boyfriend. Game on! We are ready to rock and I am a very happy man!

Finding a location to rig one highline always involves some scouting. Finding a location to rig multiple highlines, with easy and quick access between anchor points, with an height that allows easy access to the silks performer, a nice foreground and easy access for lighting is a bit more of a challenge. But happens that just in the heart of the Brecon Beacons natural park, only 40 minutes away from Cardiff, there is such a place. A place called “The Giant’s Bite” climbing crag or more frequently referred to as “The Gap”. As the name so well illustrates, when seen from far away, it literally seems like a giant T-Rex has bitten the skyline of the mountains opening a passage for the sunset to shine though! Simply perfect!  On top of that, this place has become our recent playground of experimentation and we are very comfortable in there.

The rigging takes a few hours and we are very close to be ready. But no signs of Bethan. The sun is starting to go down as the horizon fills itself of magenta tones everywhere. From our advantage point of view I spot two people walking up the track and approaching the location. This has to be the determined girl. And it is! Some quick introductions and we are ready to go. We help her set up the rigging of her silk right in the middle of our second and shorter highline. By mere luck the beautiful red silk length is just about enough to reach the ground to a height where she can grab and climb up. As someone used to tell me all the time: “You don’t have to be good! Just need to be lucky!”

Beth is also about to perform without safety, exposed to the wind, about 5-8 metres off the ground and above a pile of sharp edged rocks. Something that is going to put her a bit out of her comfort zone and to a certain extent a bit of me too. In all cases very different to her typical gymn routine. As I am in the far end making the latest lighting stand adjustments and snapping a few shots of James during his warm up I suddenly spot Beth doing her warm up in the distance! Boom! I think my jaw jut dropped! In a matter of minutes she managed to get herself ready and is  already warming up pulling som incredible inverted poses and big splits!

I am over the moon and finally everything seems to be falling into place. And she even brought some bright fluo pink leggings to meet my request of bright clothing on my Facebook post!

We shoot all over dawn. We shoot and reshoot! Different angles, constantly changing light, framing and athletes! We burn the golden hour till she has nothing else to give away to us. Time for a rest break and some food. The night is reasonably still but very cold. The sun has completely set and we are ready to turn the lights on. At this point, the challenge is to keep the highliners balancing in the dark while being flashed the whole time. Then we add the fire poy and its limited fuel and ultimately synchronising everyone to perform simultaneously. Easy right?! No! We finally realize that Beth would has to set in position first, then Nat has to fire the poy and start spinning them and last the highliners have to get in position simultaneously. Easier said than done but trial after trial we eventually manage to get one shot out of camera that is acceptable! One out of dozens and and dozens. It is cold, it is dark and it is very late! We wrap up!

The seed was planted. All over the next year or two, several performances of highlining mixed with silks aerials have appeared from the most diverse corners of the globe. We didn’t set up to be the first but are happy to know that our idea might have fired some creative juices and inspired a few more people to try something a bit different. I look forward for someone to inspire me back again!

Note: The final main image of the Lines of Light is a combination of LED panel lights with portable flash lighting. In hindsight, I would have used one more flash unit and more powerful to light Bethan as she ended up having too much motion blur due to her spinning on the silk and the slow shutter speeds used. 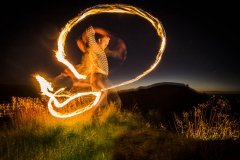 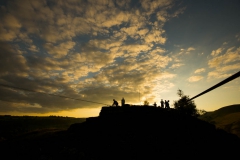 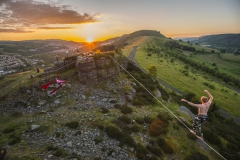 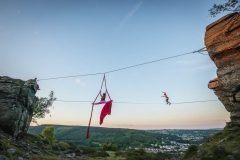 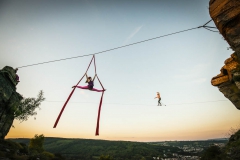 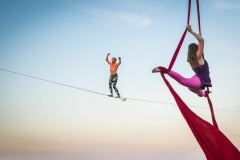 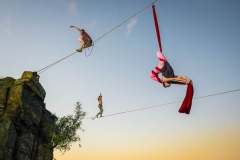 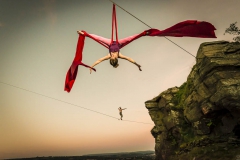 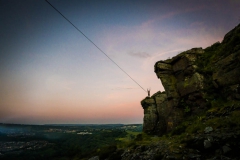 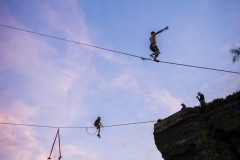 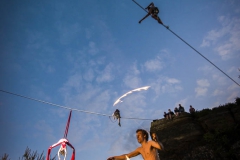 Check out the “Lines of Line Exposed” film for exclusive interviews with the performers and some motion graphics experiment on the main image of the Lines of Light.